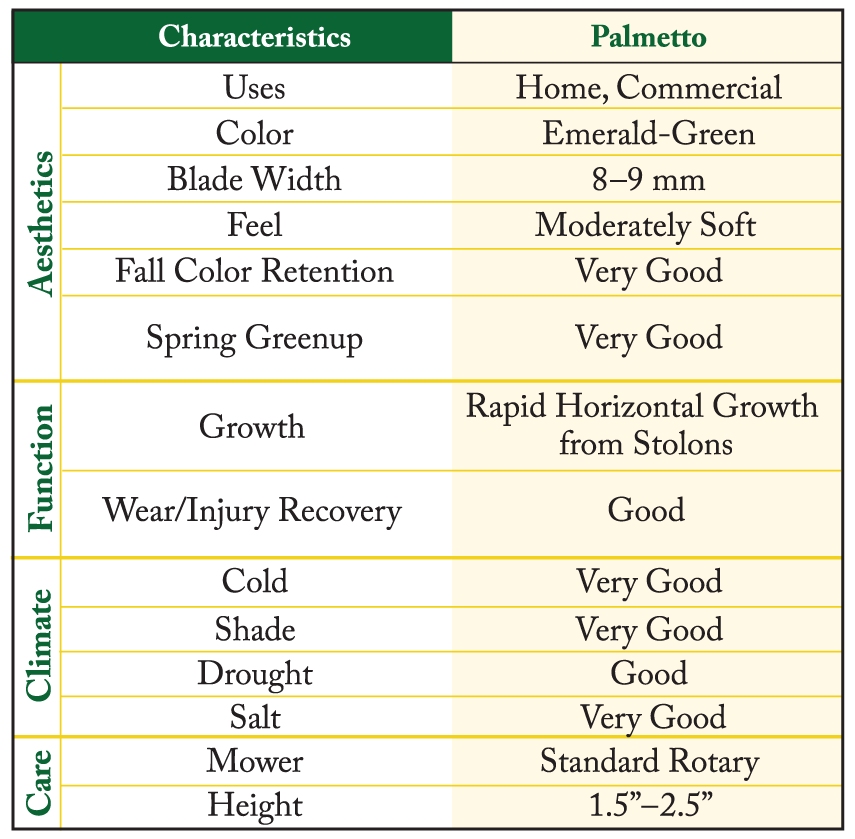 Palmetto St. Augustine, a grass discovered and developed on a sod farm in central Florida, thrives across the southern United States, from Florida northward to coastal Virginia and westward to California, under a wide range of climatic and soil conditions, making it an ideal choice for residential and commercial use. Palmetto has an outstanding emerald green color that is truly eye catching. It performs well in full sun yet thrives in shaded areas where other grasses fail. Palmetto St. Augustine requires 3-4 hours of direct sunlight per day. It is cold hardy to near 0° F, classifying it as one of the most cold-hardy St. Augustine varieties available. It is also frost tolerant and holds fall and winter color longer than Bermuda, Centipede, or other St. Augustine cultivars. It will remain evergreen in some areas of the DeepSouth. Palmetto St. Augustine also has a massive root system, making it drought tolerant once established. Palmetto St. Augustine recovers quickly from damage by wear or minor scalping as it sends out runners to repair open areas. Palmetto has proven itself a superior St. Augustine for over nine years, and is now the largest volume warm season proprietary grass sold in the United States. Palmetto has become the St. Augustine of preference in many areas of the country, described by many landscapers as the best overall St. Augustine. Palmetto, like all other St. Augustine’s, has routine installation and maintenance needs that must be properly addressed. The following information is not limited to Palmetto, but is applicable to most grasses in the St. Augustine family.